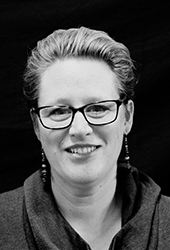 Kylie is a writer based in Melbourne, Australia. After years of improvisation experience with Impro Melbourne and The Court Jesters in Christchurch NZ, she turned to writing. Kylie has had a number of her ten minute plays performed in Short and Sweet including Waiting which was part of the top 10 in Sydney’s festival in 2013.

On the Edge was first performed in 2012 and won judges and audience choice awards at Eltham’s 10 Minute Quickies. It was also picked up by Sydney's Short and Sweet Festival. After developing it into a one act play, it toured the Victorian One Act Play Festival Circuit where it won best new script and best play in most of the festivals where it was entered. Two years later, Theatre 451 picked it up and performed it as part of their 'A play, a pub and a pot' season. Most recently it was performed by Peridot Theatre in 2018 where it again, won a number of awards around the One Act Play Festival circuit.

Kylie has written a number of other one Act plays, including Ravaged, which recently won Best one act play at the Lyrebird awards.