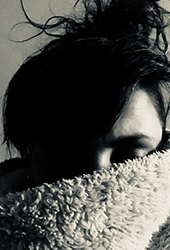 Emma Workman is a Brisbane based playwright currently developing a series of one act plays under the banner Let’s Speak Of The Unspoken. The first in the series, Yielding was recently nominated for the Matilda’s 2018 Lord Mayors Best New Australian Work. The second, Thread, was longlisted for the 2018/19 QLD Premier’s Drama Award.

Emma graduated from The University of Tasmania with a Bachelor of Performing Arts and co-founded Second Storey Theatre Productions (SSTP) with fellow graduates. Her first professional works, Salmon & GUN were produced in SSTP’s debut year. She received a Writer in Residence grant through the Tasmanian Writers Centre and an Emerging Writers grant through Arts TAS to write and direct Leaving in 2001.

In 2004, living in Melbourne, Emma ran away in a ’78 Bedford van and found herself traveling and working though out Australia. As a Disability Support Worker she worked in aboriginal and islander specific care, mental health, high needs disability care and disability ageing. Her desire to bridge the many disparate paths she has taken drives Emma to make work that respects those who have shared their stories along the way.

Emma has collaborated with Indelability Arts on their productions Look Mum, No Hands and Love Me; She continues to write for Tasmanian based Mudlark Theatre’s annual ONE DAY festival and collaborates with local short film production company Caco Productions.