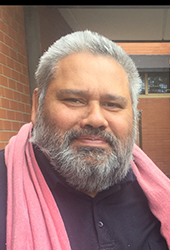 Glenn Shea is currently commissioned by Treasuring Life South East ATSI Suicide Prevention Network, Mount Gambier (Country Arts SA) to write a story about a rural Aboriginal family whose lives are impacted by suicide, the reading will take place in Mount Gambier in February 2020. He is an Award winning writer of An Indigenous Trilogy featuring Three Magpies Perched in a Tree, Masterpeice and Some Secrets Should Be Kept Secret.

Glenn is the first Aboriginal person to graduate NIDA with a degree in Dramatic Art. He is a researcher/curator; his work including the History of Blak Theatre 1967 â€“ 2000 with a one-year exhibition at the powerhouse museum (Sydney). Glenn is the inventor/facilitator the Indigenous cultural education resource THE STORYTELLER Board Game, which provides knowledge and understanding of Aboriginal people, society and cultural from a generic and non-political perspective through active learning pathways.

He is currently implementing new program for the Department of Health and Human Services, titled The Meernook Learning Program for Indigenous children in care. Glenn is a retired frontline Koorie youth justice worker, Wathaurong Aboriginal Cooperative, he wrote the WEP, full time education and development program as well as a ten-day cultural gathering camp around the boundaries of country for Aboriginal adolescent young people who came into contact with the criminal juvenile justice system. Glenn has competed for and won tenders with the State Government of Victoria and Southern Metropolitan Health for Alfred Health with cultural awareness and safety training.

Glenn was commissioned by Country Arts SA to write for their Aboriginal Diggers Project, his play MI:WI 3027 was presented in the Raukkan Community Hall on the 23rd April and on ANZAC Day 25th April 2018 in the Dunston Theatre South Australia. Glenn has also been the MC for the Adelaide Festival. He is a Guest Lecturer for Melbourne University Masters' students, History of Blak Theatre Australia and was invited by Playwriting Australia to participate in the 2019 Indigenous Retreat in Bundanon NSW.