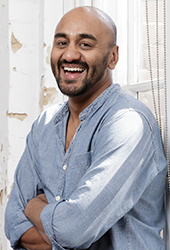 Shakthi is an Australian storyteller with Sri Lankan heritage and Tamil ancestry. He's a writer, director and producer of film and theatre. He's also a composer of original music and one half of the band Kurinji.

As a writer, Shakthi's debut play is Counting and Cracking. Co-produced by Belvoir and Co-Curious, Counting and Cracking is a 3 hour epic with 16 actors and 3 musicians hailing from 6 different countries. It had a sell out season at Sydney Festival 2019, with rave reviews and a profound impact on the Sri Lankan community. Shakthi was also a Producer and Associate Director on the production. As a co-writer, director and producer, Shakthi's most recent screen project, Laka, is a multi-platform feature film, audiovisual installation and VR project travelling to contemporary arts centres and festivals around the world.

Both Laka and Counting and Cracking form part of Shakthi's Colony body of work, a universe of interconnected stories stretching from before colonisation through to an imagined 22nd century.

Shakthi is currently Lead Artistic Consultant at Co-Curious. Co-Curious is a community arts organisation which works with the Western Sydney community to identify new storytellers, prepare storytellers for the industry and co-produce projects with film and TV companies. He was Founder and Artistic Director of CuriousWorks from 2003-2018, where his leadership led to several long-term, multi-platform arts initiatives as well as significant grassroots social change in communities in Western Sydney and remote Western Australia.

Shakthi has been an Associate Artist at Carriageworks and a founding directorate member of National Theatre of Parramatta. In 2015, he was awarded the Phillip Parson's Playwright Award and in 2011 the Kirk Robson Award by the Australia Council, given to an artist for their work in relation to social justice and community cultural leadership.