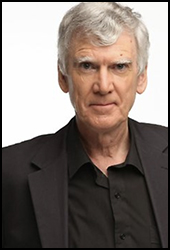 DAVID WILLIAMSON is Australia’s best-known and most widely performed playwright. His first full-length play, The Coming of Stork, was presented at La Mama Theatre in 1970 and was followed by The Removalists, Don’s Party, The Department, The Club, Travelling North,The Perfectionist, Sons of Cain, Emerald City, Top Silk, Money and Friends, Brilliant Lies, Sanctuary, Dead White Males, After the Ball, Corporate Vibes, Face to Face, Rupert, Nearer the Gods and Sorting out Rachel.

He has had over fifty plays produced. His plays have been translated into many languages and performed internationally, including major productions in London, Los Angeles, New York and Washington. As a screenwriter, Williamson has brought his own plays to the screen, including The Removalists, Don’s Party, The Club, Travelling North and Emerald City, along with his original screenplays for feature films, including Libido, Petersen, Gallipoli, Phar Lap, The Year of Living Dangerously and Balibo. The adaptation of his play Face to Face, directed by Michael Rymer, won the Panavision Spirit Award for Independent Film at the Santa Barbara International Film Festival. Williamson was the first person outside Britain to receive the George Devine Award (for The Removalists). His many awards include twelve Australian Writers’ Guild AWGIE Awards, five Australian Film Institute Awards for Best Screenplay, and in 1996 the United Nations Association of Australia Media Peace Award. In 2005 he was awarded the Richard Lane Award for services to the Australian Writers’ Guild. David has received four honorary doctorates and been made an Officer of the Order of Australia. Williamson has been named one of Australia’s Living National Treasures.