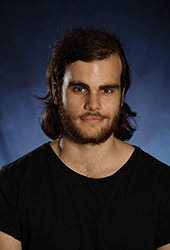 Jackson Used is an award winning interdisciplinary artist from Perth, Western Australia, working across the mediums of stage, screen, aural storytelling and poetry. Jackson is a lecturer at the National Institute of Dramatic Art, working with students in the MFA Writing Program, teaching the Aural Storytelling & Podcasting syllabus he curated. He has worked extensively in Perth, Brisbane and Sydney, as a writer, director, dramaturg and producer. Much of this work has been done with sandpaperplane, the theatre company he co-founded in 2014. Recent writing credits include Delta Sierra Juliet (NIDA & 107 Projects, Redfern), and Lilac (KXT, Kings Cross). In 2020 Jackson was awarded the major prize for the Quantum Art Competition, held by the ARC Centre of Excellence for Engineered Quantum Systems. The winning entry, titled Entanglement Suite, was a collection of five poems written in response to different concepts from quantum physics.