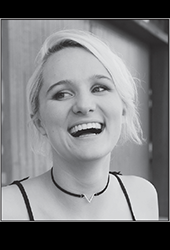 Yve Blake is a composer, lyricist, playwright and screenwriter born on the lands of the Eora Nation (Sydney, Australia).

She is best known for writing the book, music and lyrics for the smash-hit musical FANGIRLS. In 2019, FANGIRLS premiered at Queensland Theatre and Belvoir to multiple five-star reviews and sell-out crowds, and in 2021 it returned by popular demand for an Australian tour. FANGIRLS was awarded the 2019 Sydney Theatre Award for Best Mainstage Musical, the Matilda Award for Best Musical or Cabaret, and received the 2020 AWGIE award for Music Theatre.

Previously, Yve has had her work developed and presented at Soho Theatre, Southbank Centre, Old Vic New Voices, the National Theatre Studio, The Barbican, Griffin Theatre Company and the Brisbane Powerhouse. She was the inaugural recipient of the atyp Rebel Wilson Theatre-Maker Scholarship, is an alumni of the Royal Court Writers’ Programme, and has also been a visiting artist at Princeton University. In 2019, Yve took the stage in front of five and a half thousand people as a speaker at TEDxSydney. Her talk For the love of Fangirls has since been promoted to an official TED talk on TED.com, where it has received more than a million views. Currently, Yve is developing several other new works for stage, film, TV and podcast audio.