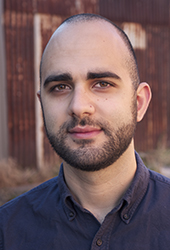 Alberto Di Troia is a Melbourne-based playwright and filmmaker, and a graduate of the Bachelor of Fine Arts (Film & Television) and the Master of Writing For Performance at the VCA. He has presented work with Melbourne Theatre Company, Darwin Festival, Theatre Works, Melbourne Fringe, Australian Theatre For Young People, ABC Radio National and Critical Animals; his short films and film editing work has played festivals both nationally and internationally.