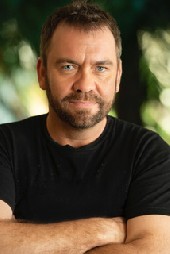 Brendan is an award-winning writer, actor and director for TV, Theatre and Film.

He wrote the smash hit RUBEN GUTHRIE for Belvoir St Theatre in 2009, and subsequently wrote and directed the film adaptation, which opened Sydney Film Festival in 2015, and the Laughs section of the London BFI in the same year. Brendan also penned THE SUBLIME which premiered at Melbourne Theatre Company; and wrote and directed the sell-out season of BED, which premiered at Sydney Theatre Company announcing him as the ‘leading light amongst playwrights of his generation’ The Sun Herald.
Brendan won the Patrick White Playwright’s Award, the Philip Parsons Young Playwright’s Award and the Griffin Award. His 11 plays have been produced all around the world, including MEN in NYC, Frantic Assembly’s tour of RABBIT in the UK, and the HAPPY NEW transfer from the Old Red Lion to the Trafalgar Studios. Brendan also ran Wharf 2 Loud at Sydney Theatre Company for three years, where he wrote and directed the play SELF ESTEEM, and curated the PUSH PLAYS series, unearthing an abundance of new talent.
Brendan wrote and directed the ABC telemovie THE OUTLAW MICHAEL HOWE and scripted and appeared in the feature film SAVE YOU LEGS! Brendan was a main staff writer on the acclaimed Foxtel TV series LOVE MY WAY, in which he starred. Many of his episodes for LOVE MY WAY were nominated for Australian Writers Guild Awards (AWGIE) for Outstanding Screenplay. Brendan also wrote two episodes of the multi award-winning series THE SLAP for which he won the AACTA Best Screenplay prize for his episode 3 ‘Harry’. THE SLAP was nominated for both BAFTA and EMMY awards, before being remade on NBC in America. Brendan also wrote on the ABC TV adaptation of the popular children’s book MY PLACE.
Brendan’s debut novel HOW IT FEELS was published by Pan Macmillan in 2010, an independent best seller. After four years living in London, Brendan is now shooting the next two AVATAR films in Wellington, as an actor. Brendan has two TV titles in development in the UK, a new feature film based on his family Christmas, and two new stage plays. Brendan is based between New Zealand and London, and yet remains a loyal Cronulla Sharks fan.