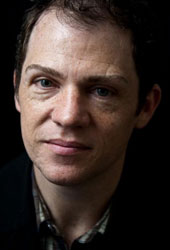 Ben Ellis’s plays include The Armour, Story of the Red Mountains, Falling Petals and These People. His writing for Headlong’s Decade project in London directed by Rupert Goold, was singled out by The Wall Street Journal as a standout piece alongside others by Abi Morgan, Mike Bartlett and Christopher Shinn. Other collaboratively written theatre projects include Life for Beginners, Fifty Ways to Leave Your Lover and 360 Positions in a One Night Stand. He was awarded this year’s Writer-in-Residence at the Langham, London, from over 200 other British-based applicants. Other awards include the Patrick White Playwrights Award and the Wal Cherry Play of the Year. Recently he co-wrote Bird, an outdoor performance piece for children that featured puppets and toured UK summer festivals such as Latitude. He has written for community youth theatres in both Melbourne and London. He is an associate playwright with Theatre 503, IronBark and Forward Theatre Project.