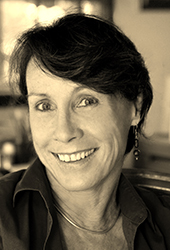 Angela Murphy is a Cairns-based practitioner. Her first play The Boathouse, co-produced by JUTE Theatre, Cairns and The Darwin Theatre Company (2006), reflects a community’s battle to fight development and save a much-loved historic building. Her short play, Survival Instincts examined the jungle of the classroom from a teacher’s perspective. It resonated with audiences around Australia and was an award winner at the Sydney (2009), Brisbane (2009) and Canberra (2010) Short and Sweet Festivals. Angela’s comedy, What are the Odds? (2011), set on Melbourne Cup day, was a box office hit. Produced by JUTE Theatre it unravelled the complexities of family and friends’ relationships at a suburban Cup lunch. In 2015, the Company brought Angela’s office comedy Stewed to the stage, infused with the trauma of bureaucracy, bullying and Ginger Kiss tea.

Angela’s own, Veranda Theatre Co, launched in 2020, was proud to reignite theatre in November 2020 at the Cairns Performing Arts Centre, with her latest work, Prospect Terrace. The play explores the relationships between warring siblings, an ageing patriarch, and a dangling inheritance. www.verandatheatreco.com.au