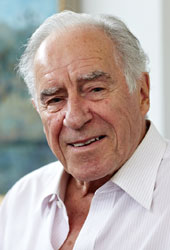 Alan Hopgood was one of the first Australian playwrights promoted by the Union Theatre Repertory Company. He began professional acting in the company in 1956. He wrote And the Big Men Fly, in a week in 1963. It is a comedy about a barefoot country Australian footballer who becomes a star. It opened five weeks later, with Hopgood as J. J. Forbes, president of a football club. It was an immediate popular success and was later performed in other states. The Melbourne Theatre Company revived the play in 1988. The company also staged two more of Hopgood's plays: The Golden Legion of Cleaning Women, a comedy about business practice, and Private Yuk Objects (1966), which explored Australia's participation in the Vietnam War. In the 1970s Hopgood turned to film and television writing. He returned to the stage in the 1990s with libretti for musicals.