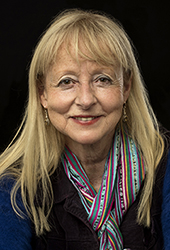 R. Johns (Rosemary) has a First-Class Honours in Drama, Manchester University, an MFA from UCR and received a scholarship to Tulane University, New Orleans. Her political thriller Black Box 149 was translated and selected in 2017 to play in repertoire at the Staatstheater NÃ¼rnberg, the first time that German State Theatre has ever produced a play by an Australian playwright. The work was also selected for DFAT’s Australia now Germany program.The play was first produced at La Mama. Rosemary is Vice-President of Women Playwrights International and has represented Australia in curated conferences of Women Playwrights International, where her work has been presented in Stockholm and Mumbai, and with co-devisers in Cape Town and Athens.In 2020 she will attend A Festival Of Plays By Women, in Manila, The Philippines, with an extract presentation from her play Tchekov at the House of Special Purpose ( Currency Press 2019, La Mama 2017/2019 ). At the Centre of Light, (La Mama Explorations, Victorian regional tour and produced commercially at 12th Night Theatre, Brisbane) had an extract published, in Scenes from a Diverse World Anthology U.S.A. Carrying Shoes into the Unknown, set in Iran (VCE Theatre Studies Playlist, published Currency Press, with an extract in Contemporary Monologues for Young Men and Women: Volume 2, LAMDA, Oberon Press UK). Rosemary was a finalist for The Griffin Playwriting Award and the 2018 BBC International Playwriting Radio award. She is a six times published author with Currency Press. Rosemary also devises theatrical experiences for students in rural Victoria.