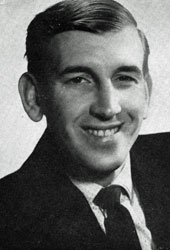 Peter Kenna (1930â€“1987) was one of thirteen children brought up in an Irish Catholic family in the working class Sydney suburb of Balmain. A radio and stage actor, he first attracted national attention as a writer in 1959 when The Slaughter of St Teresa's Day won a General Motors-Holden National Playwriting Competition. He moved to London in 1959 where he wrote Talk to the Moon and Muriel's Virtues. He returned to live in Sydney in 1971, debilitated by a chronic illness. Nevertheless, the 1970s proved to be his most fruitful decade: Listen Closely, Mates, Trespassers Will Be Prosecuted and The Cassidy Album Trilogy - A Hard God, Furtive Love and An Eager Hope - was written between 1973 and 1982.