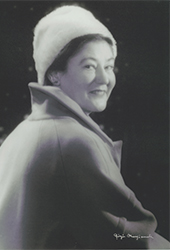 Oriel Gray (1920-2003) was born into a politically active family in Sydney. At age eleven she began her long association with Sydney's left-wing New Theatre, firstly as a comedian and then as a writer. She was a member of the Communist Party of Australia from 1942 to 1950. Her first plays were five-minute radio dramas for a trade union education program. Her numerous stage plays and revues included Marx of Time (1941), Lawson (1943), Westernlimit (1946), My Life is My Affair (1947) and Had We But World Enough (1950). The Torrents shared the 1954 Playwright's Advisory Board prize with Summer of the Seventeenth Doll, and Burst of Summer won the 1958 J. C. Williamson Theatre Guild Competition. In the 1960s she became a television writer, and for nine years was a writer for the popular serial, Bellbird. Her autobiography, Exit Left: Memoirs of a Scarlet Woman, was published in 1985.