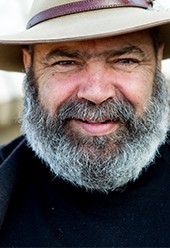 Richard Frankland is a proud Gunditjmara Man who lives on country in south-west Victoria.

Despite leaving school at the age of 13, Richard has notched up many academic achievements. In 2007 he completed his Master of Arts at RMIT University with a thesis entitled ‘The Art, Freedom and Responsibility of Voice’ In 2019 Richard completed his doctorate and was awarded his Doctor of Visual and Performing Arts from the University of Melbourne a dissertation on his life’s achievements and contributions towards Indigenous Australian’s cultural and community foundations.

Richard’s current role is the Associate Professor Cross Disciplinary Practice - Richard at the University of Melbourne - School of Theatre, Film and Television

Richard’s lifelong work has been to facilitate the voice of Indigenous Australians via his many public personas. Richard constantly reminds people that: “We are not a problem people, we are people with a problem and that problem was colonisation”