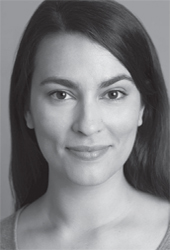 Kendall Feaver received a Judges Award at the 2015 Bruntwood Prize for Playwriting, Best New Play at the 2018 UK Theatre Awards, the 2019 Victorian Premier’s Prize for Drama, and the 2019 Nick Enright Prize for Playwriting for her play, The Almighty Sometimes (Royal Exchange, Manchester; Griffin Theatre Company, Sydney). She has written on attachment at the National Theatre Studio and was recently announced as the 2019 Philip Parsons Fellow at Belvoir Street Theatre and as part of the Genesis Almeida Writer’s Programme (2019/20). Her adaptation of the 1901 novel My Brilliant Career premiered at Belvoir St Theatre in 2020. Forthcoming plays include Wherever She Wanders (Griffin Theatre Company).