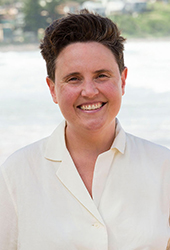 Sophia is a writer, director, producer and recreational scholar who has been making art (and making trouble) in different formats for 15 years. Sophia’s theatrical work includes: 'Haunted (Hoey)' [for Surry Hills Festival 2015 and 2016]; 'Sillage', [for Surry Hills Festival 2016 and Sydney Fringe Festival 2019]. 'The Bed Party', [for Sydney Gay and Lesbian Mardi Gras and The Old 505 Theatre’s FreshWorks program, 2019. The Mardi Gras/FreshWorks season was sold out and a three week encore season was presented a month later]. 'Keeping Time', [read as part of KXT’s Storyteller’s Festival, 2019]. In 2020, Sophia developed a new work as part of Merrigong Playwrights’ Program and was awarded a Northern Beaches Council Creative Community Support Grant to present a staged reading of this work at Council’s new creative space, Avalon Workshop, in 2021. 'The Bed Party' has been selected to be featured as part of the official program of the 12th Women Playwrights International Conference [Montreal, Quebec, Canada, 2022].