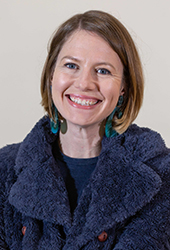 An AWGIE winning playwright, AWG Board Member and State Chair of the AWG in South Australia, Sally is also a screenwriter, children’s author and producer. As a Playwright Sally’s work has been produced in the DreamBIG Children’s Festival (Gone Viral, 2017 and An Anthology of Un-kept Secrets, 2019), the World Festival of Children’s Theatre (A Kid Like Me, 2016), the Come Out Children’s Festival (A Kid Like Me, 2015) the Adelaide and Melbourne Fringe Festivals, and has featured on the VCE Playlist (Fallen Sky, 2006). As a Dramaturge she has worked on shows in the Adelaide Festival (Can You Hear Colour, 2018) and the Adelaide Cabaret Festival (A Migrant’s Son, 2018). In 2016 she won the AWGIE for Youth & Community Theatre with Alirio Zavarce for A Kid Like Me, and in 2014 she won the Trinity College London International Playwriting Award with her play Gone Viral. As a screenwriter Sally has worked on numerous film and television projects, as a script consultant and as a writer-for-hire working up short documents for the market.

In 2020 Sally was selected for the SPARK TV Development Workshop (Matchbox & Epic Fillms), and was the 2020 Artist in Residence for Slingsby Theatre Company, where she developed her new play Night Light with funding from Arts South Australia. She was also one of five core writers for the State Theatre Company/ActNow Theatre co-production Decameron 2.0, and a contributing artist for Patch Theatre Company's Spark ‘theatre in a box’ project.

Sally published her first children’s book Teddy-grams for Campbell in 2014, and as well as working as a teaching artist for Ink Pot Arts, she is the director of her own company Free Range Theatrix, which produces theatre and creative educational experiences for children and young people.