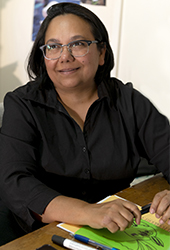 Barbara Hostalek was born and grew up on Larrakia land and now calls Noongar boodjar (Boorlo) home. Her family connections are with language groups Yawaru and Gija on her Mum’s side and Territorian, Czech and Greek on her Fathers side. She has been writing short plays with Yirra Yaakin (Standing Tall in Noongar Language) Theatre Company’s Writers Group since 2015. Cracked (2015), Banned (2016), Go Fish (2017), Turtle Pool (2018), Thirst (2019) and Perpetuity (2020). Cracked was produced by Yirra Yaakin Theatre Company and Playwriting Australia in 2019. During July 2020 Black Swan State Theatre Company produced Own Way as part of the Unsung Heroes monologue series. And in June 2020, Playwriting Australia with Yirra Yaakin Theatre Company collaborated to produce Burning for the Dear Australia postcard series which can be found at Australian Plays.