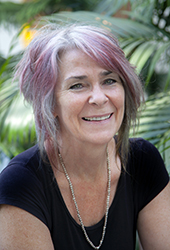 Mary Anne Butler's plays have been described as ‘poetic, evocative and muscular’. Theatre credits include Broken, Highway of Lost Hearts, Cusp, The Sound of Waiting, Alice in Wonderland (adaptation), One More Hour and Half Way There. Her playwriting awards include the Victorian Prize for Literature, Victorian Premier’s Literary Award for Drama, and an AWGIE; and her works have twice been awarded the NT Chief Minister’s Book of the Year: for Broken in 2018, and for Highway of Lost Hearts in 2016. Nominations include the Nick Enright Prize for Playwriting at the NSW Premier’s Literary Awards [for Broken in 2016 and for The Sound of Waiting in 2018], a stage AWGIE Award (for Broken) and the Griffin Theatre Award. Highway of Lost Hearts and Cusp are on the South Australian and Northern Territory HSC Drama Curricula. Mary Anne is a Sidney Myer Creative Fellow, an Arts NT Fellow, a Winston Churchill Fellow, a Regional Arts Fellow and an Asialink Fellow. She holds an MPhil in Creative Writing, an MEd in Arts Education and is currently undertaking a PhD in the creative Literature of the Anthropocene.